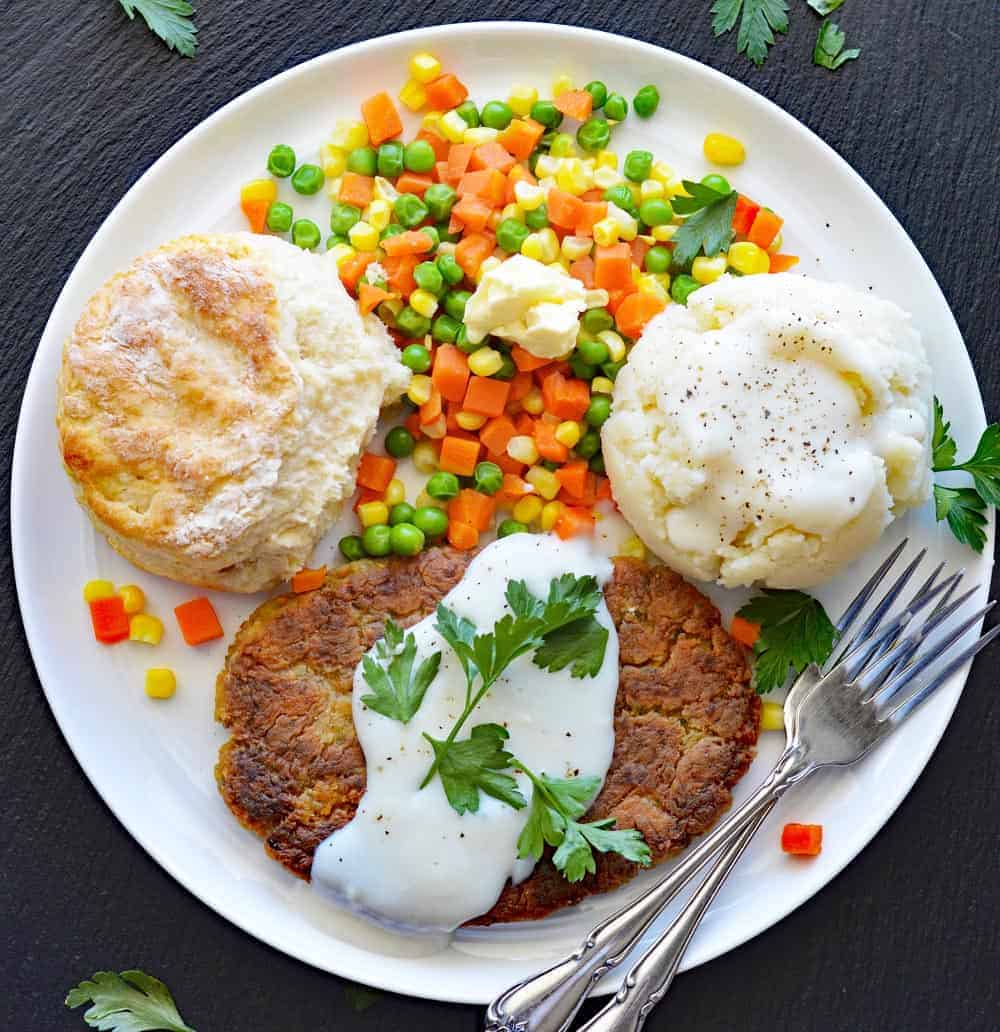 This recipe for Vegan Chickpea Fried Steak is derived from a few of my most popular recipes to date!  This Vegan Chickpea Parmesan, these Crispy Chickpea Cutlets with Lemon Caper Sauce and these Veggie Nuggets. These three recipes have been pinned (and repinned) sooo many times … which is crazy, since this base chickpea recipe was my own little experiment!

When I think back in my childhood and we had all of those truly awful frozen dinners, I remember something like a country fried steak with mashed potatoes and carrots.  So this is my attempt to recreate that memory but vegan…and not awful 🙂 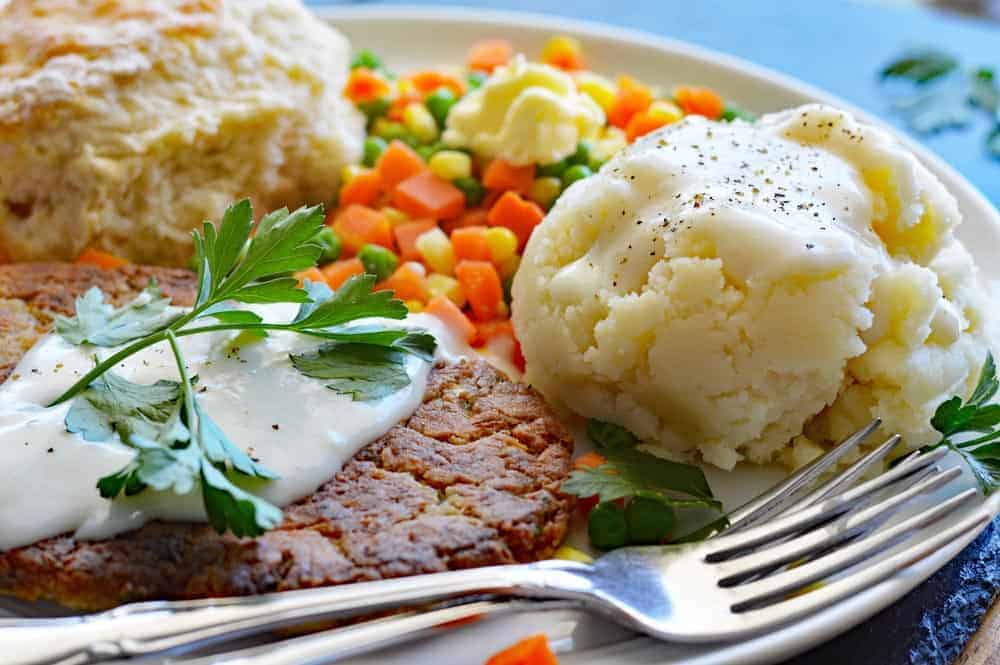 The base of this “steak” is comprised of two parts.  First, in the bowl of a food processor, puree onions, chickpeas and parsley until it looks like this.  Don’t go too far with it, we want texture!  Remove this to a bowl. 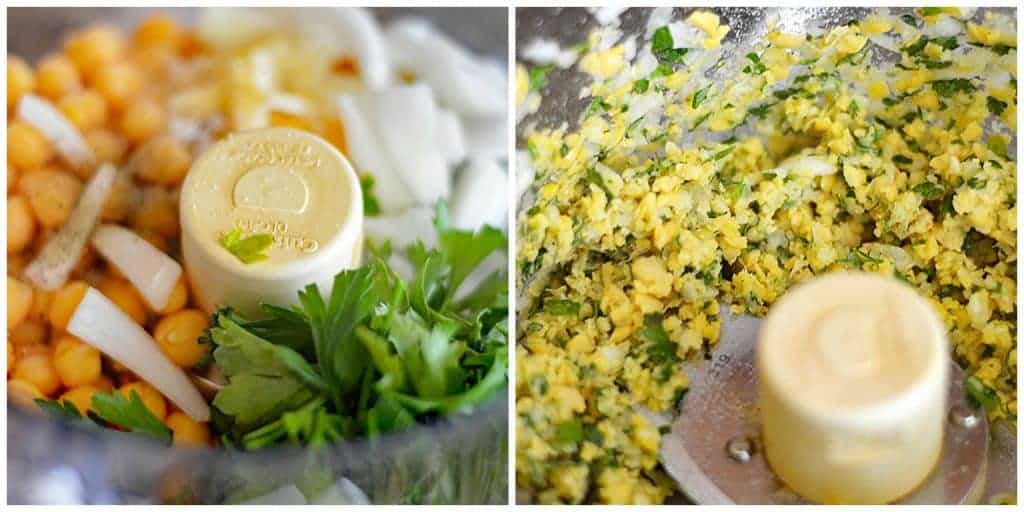 No need to clean the processor.  Simpy add carrots and mushrooms.  Pulse until it looks like this.  Again, leave some texture behind. 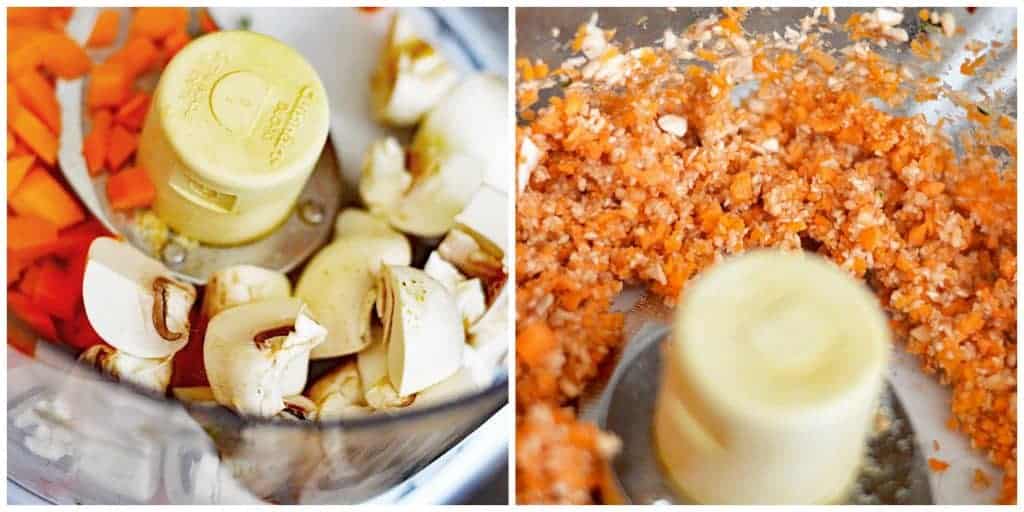 The two mixtures get combined with a flax “egg” and it forms this lovely little mixture which I press into large balls.  Don’t worry about the patty shape just yet.

I set up a dredging station which is just almond milk and flour.  I start with flour, then milk and back into the flour.  The reason I do this as a ball first is because it is MUCH easier to form the patties after they are floured and flatten when they hit the hot pan.  You don’t need much oil at all to fry these.

I let them cook one one side (don’t touch!) until they get browned and crispy.  Flip and repeat.  I then let them sit on paper toweling for a few minutes.  They continue to set up even further. 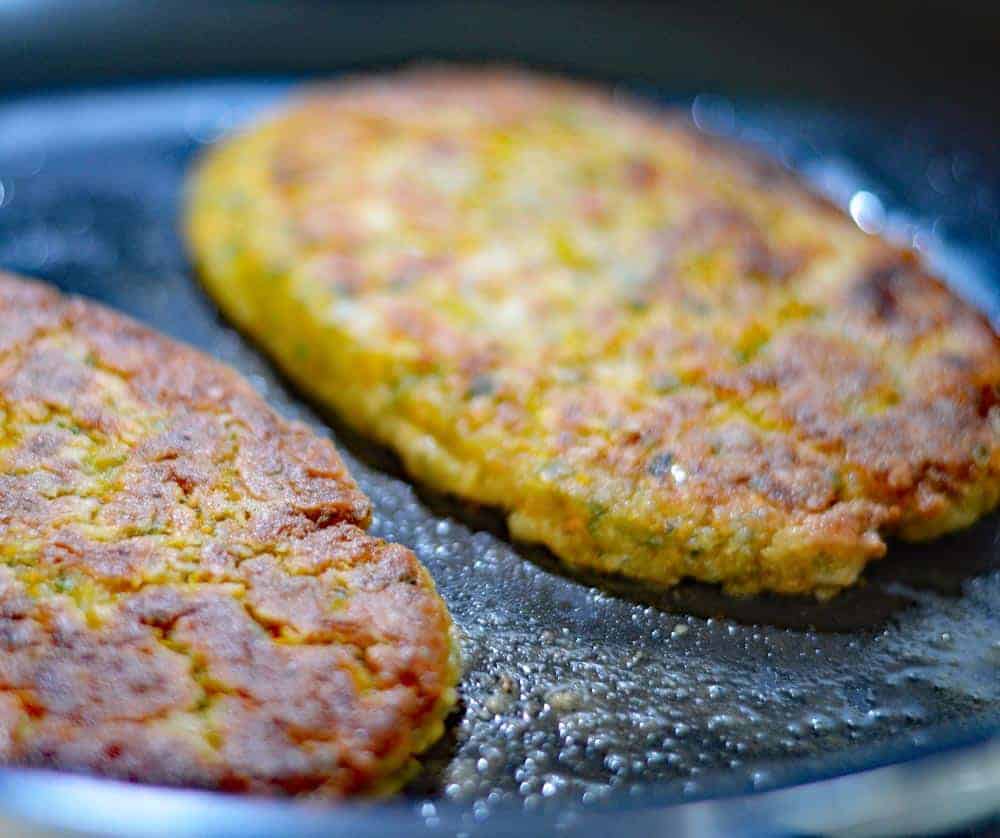 I served with just a basic mashed potato.  Nothing fancy, just added almond milk, vegan margarine and seasoned with salt and pepper.  I am a mashed potato freak.  Love them!

For color, how about a mixture of carrots, peas and corn.  Frozen works just fine.

If you’d like the biscuit recipe, you can find it here.  These are my absolute FAVORITE biscuits!  I dare you to eat just one. 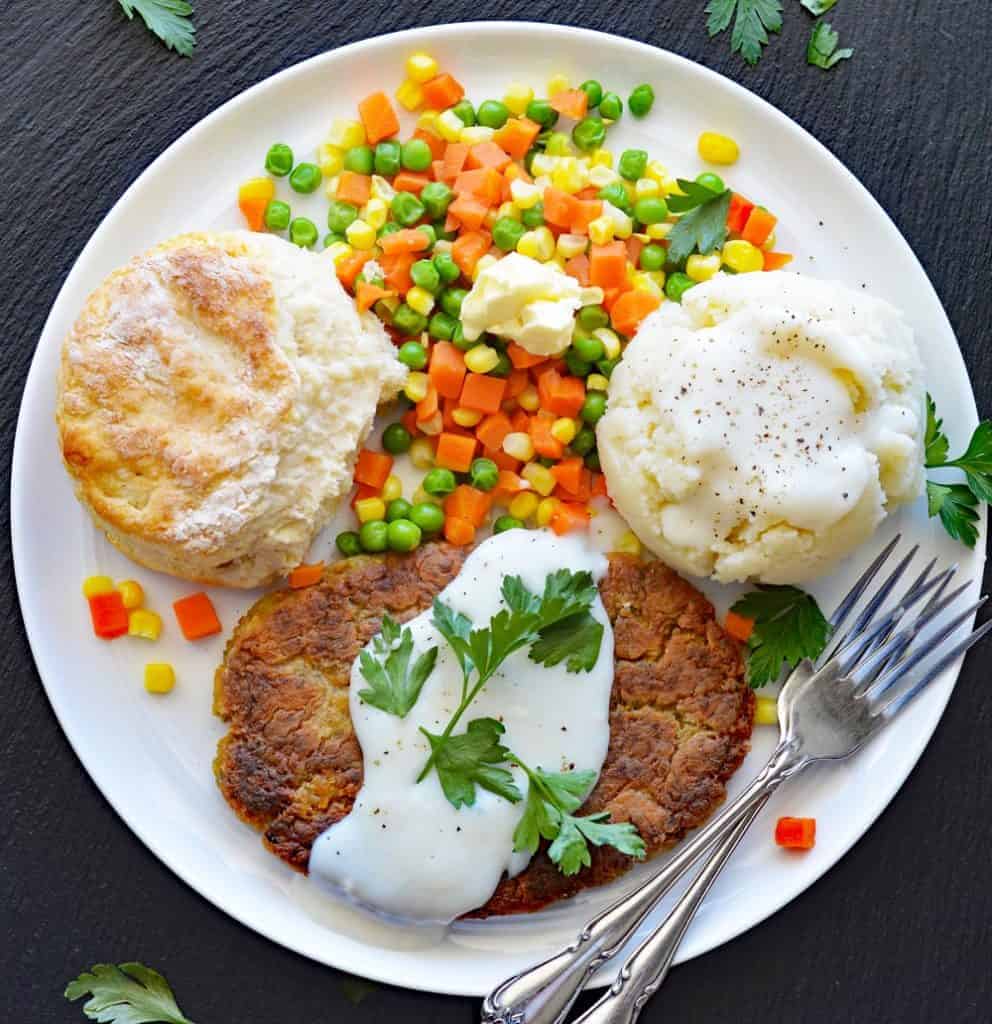 The final touch is a simple white milk gravy made from a bechemel.  Simply put, it’s a flour and almond milk roux that we added to the residual oil in the frying pan.  Whisk in the remaining almond milk and season well with salt and pepper.  I spoon it lightly over top with additional served on the side for guests who may want a bit more. 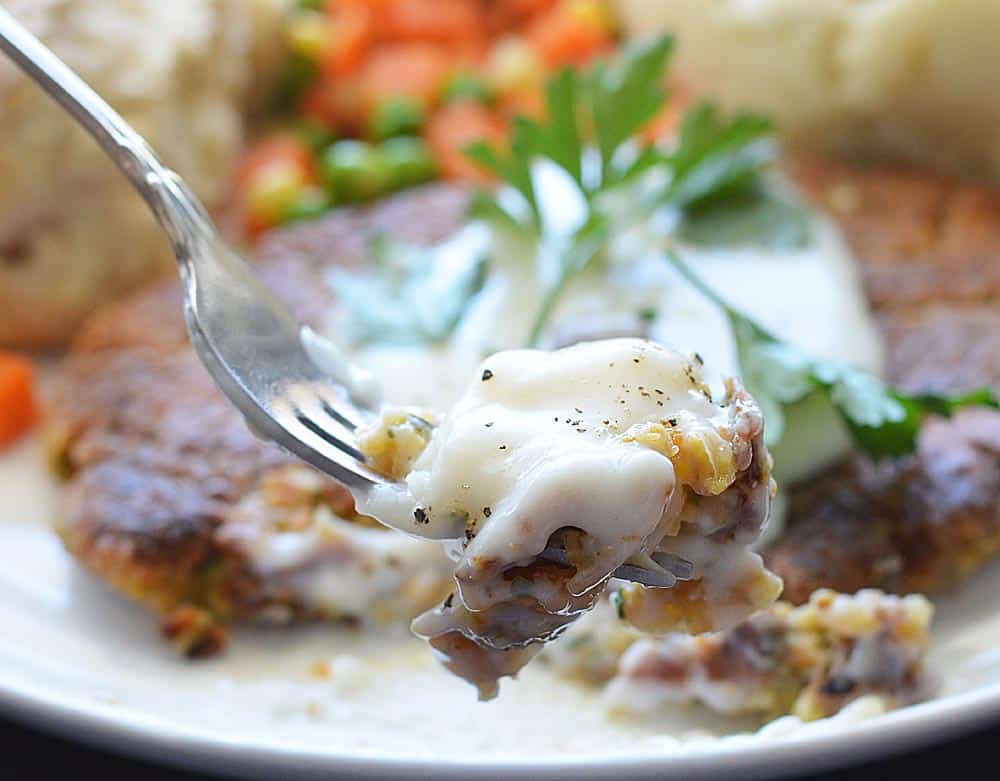 Did you make this recipe for Vegan Chickpea Fried Steak?  If so, let me know what you thought in the comments section below!

And if you enjoyed this recipe, why not PIN IT FOR LATER! 🙂 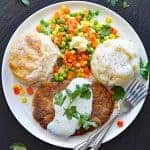 FOR THE CHICKPEA MIXTURE:

FOR THE CARROT MIXTURE:

TO MAKE THE CUTLETS:

FOR THE WHITE "MILK" GRAVY:

TO MAKE THE WHITE "MILK" GRAVY: 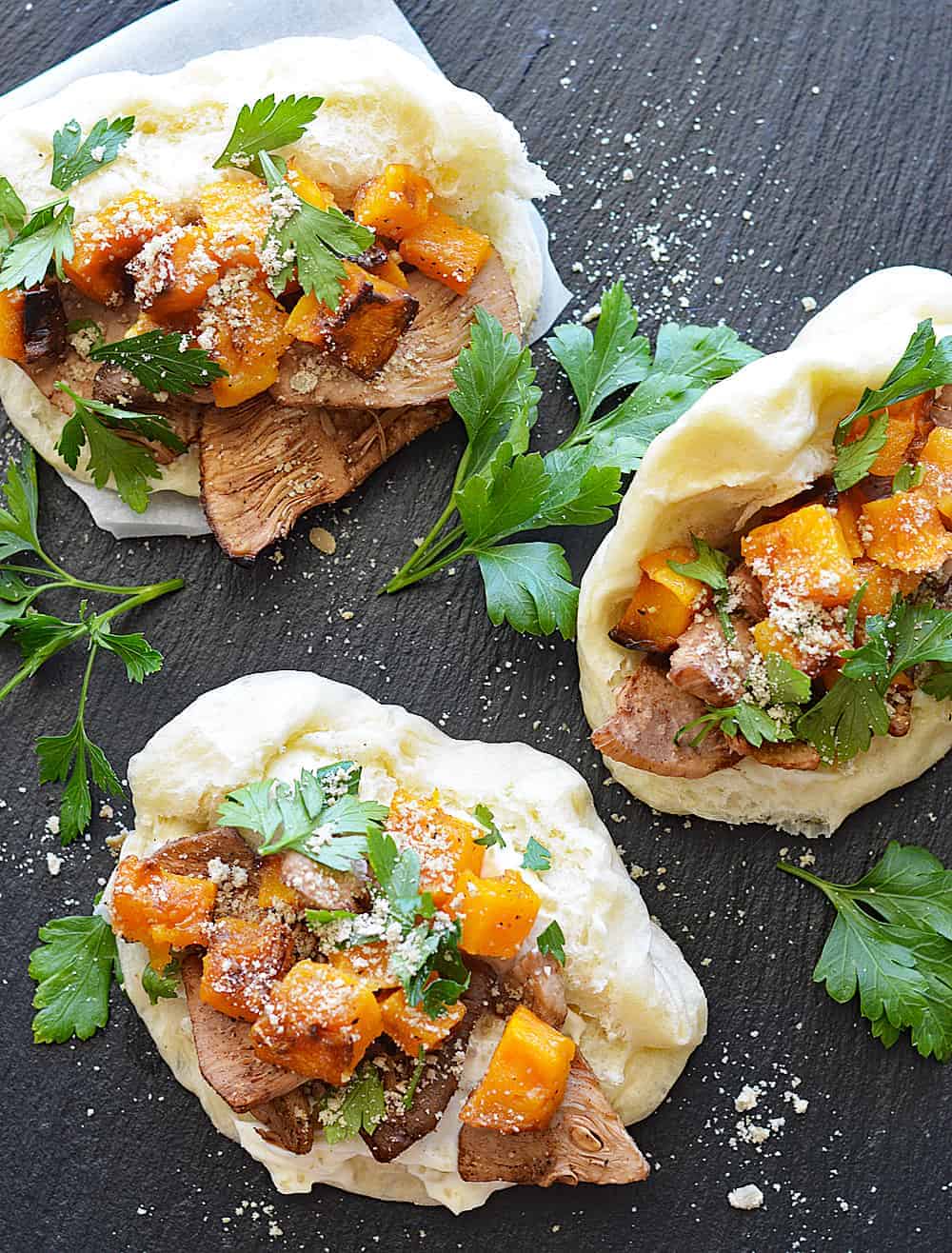 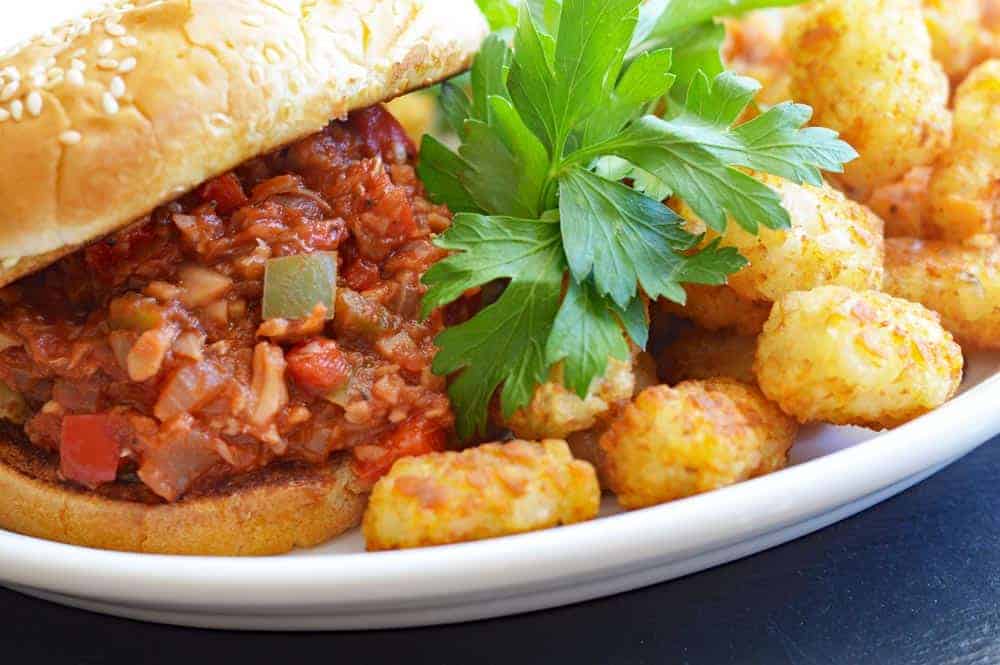