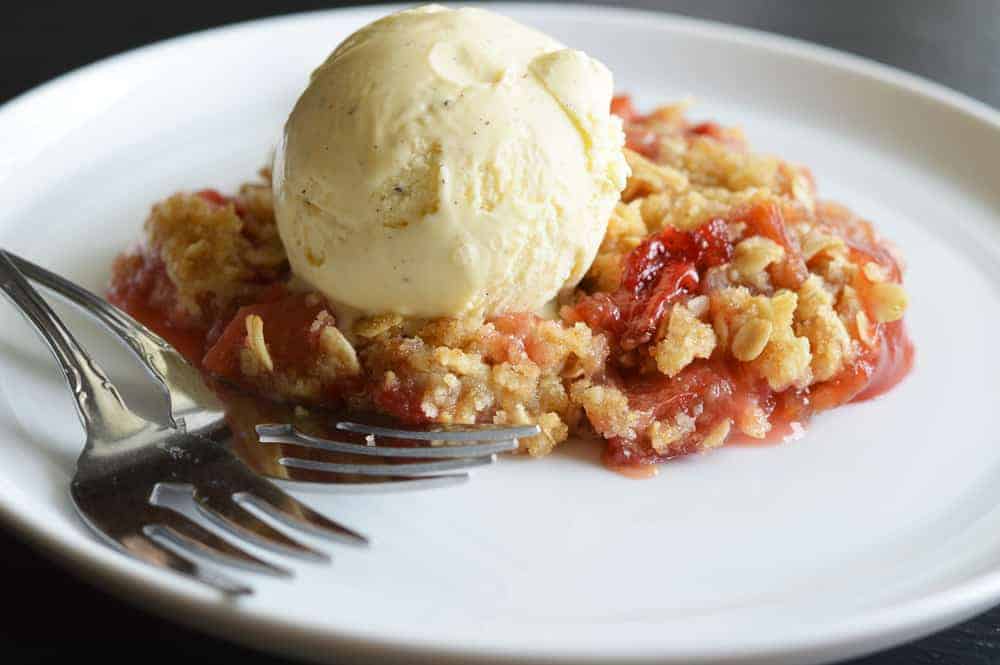 What is more refreshing than an easy summer dessert like this Vegan Strawberry Rhubarb Crisp Recipe? Served with a vegan-friendly vanilla bean almondmilk ice cream, it is sweet, tart and incredibly delicious!

What is rhubarb? Is Rhubarb a fruit?

Rhubarb is actually technically a vegetable, but legally considered a fruit. It’s true! You can read about that here. Sold as stalks, like celery, in most grocery stores and farmer’s markets. Harvested in the spring, with a relatively short season from April to June.

The color ranges from pink to bright red and sometimes even a pale green. Unlike other fruits, the color is not indicative of it’s ripeness (or sweetness). The stalks are the only edible part of the plant and known for their naturally very tart taste. That is why you will almost always see it cooked in a dessert with a sweetener, such as sugar.

Fun fact: In the old days, it is said that children in the United Kingdom and Sweden were given a tender stalk of rhubarb dipped in sugar as it was an affordable sweet. My cheeks are puckering just thinking about it! 🙂 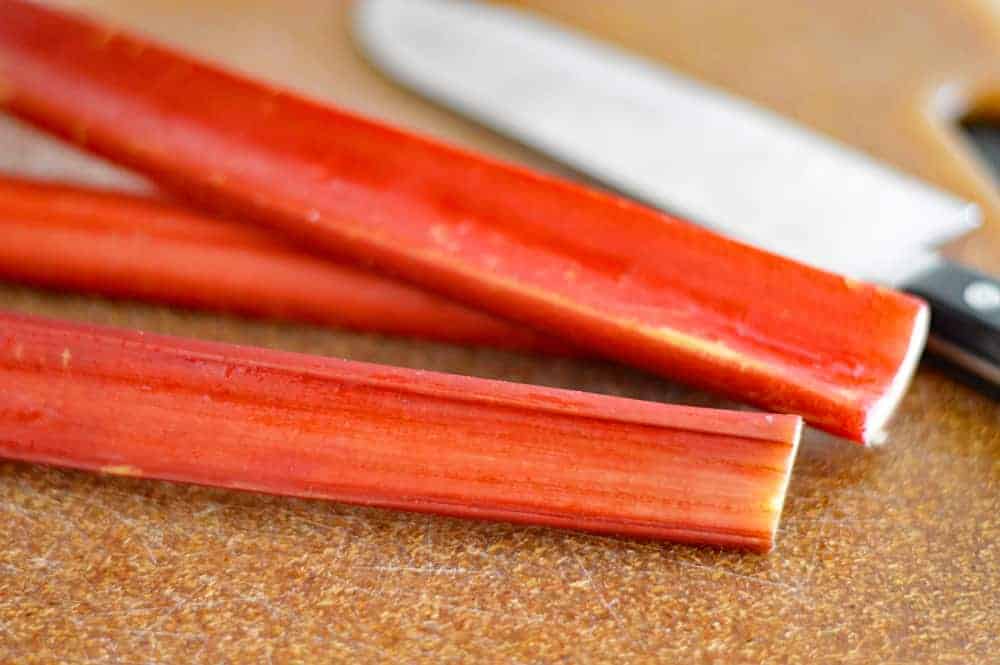 Strawberries and rhubarb are often paired together and a crisp, such as this one, and strawberry rhubarb pie, are the two most popular ways to enjoy it. I chop them so they are relatively the same sized pieces. 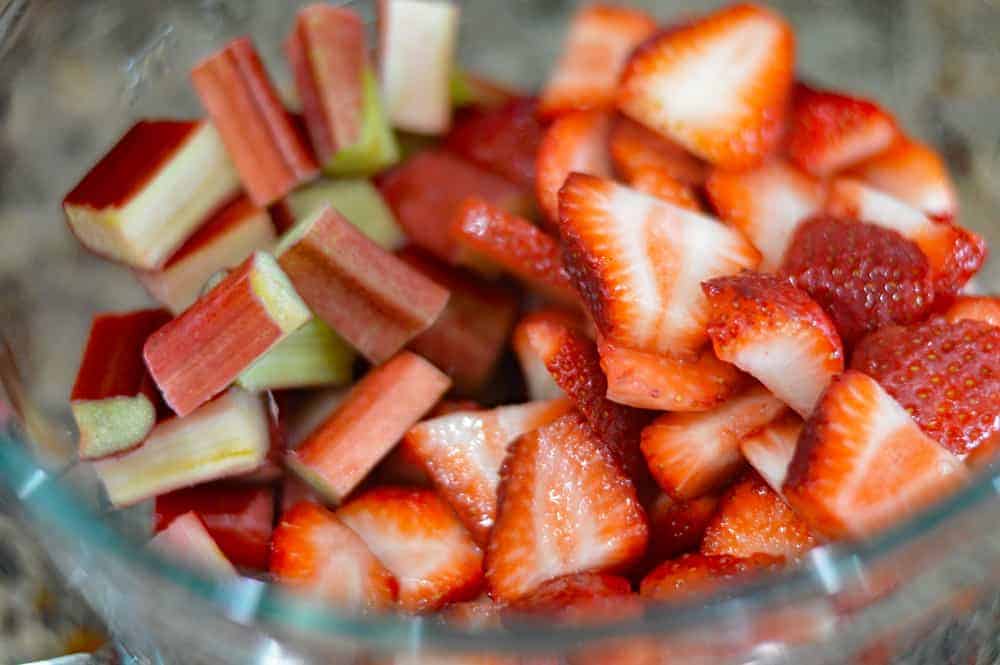 Before we get started, we need to combine the cornstarch with the liquids with a whisk. In this, that is orange juice. This prevents clumping. 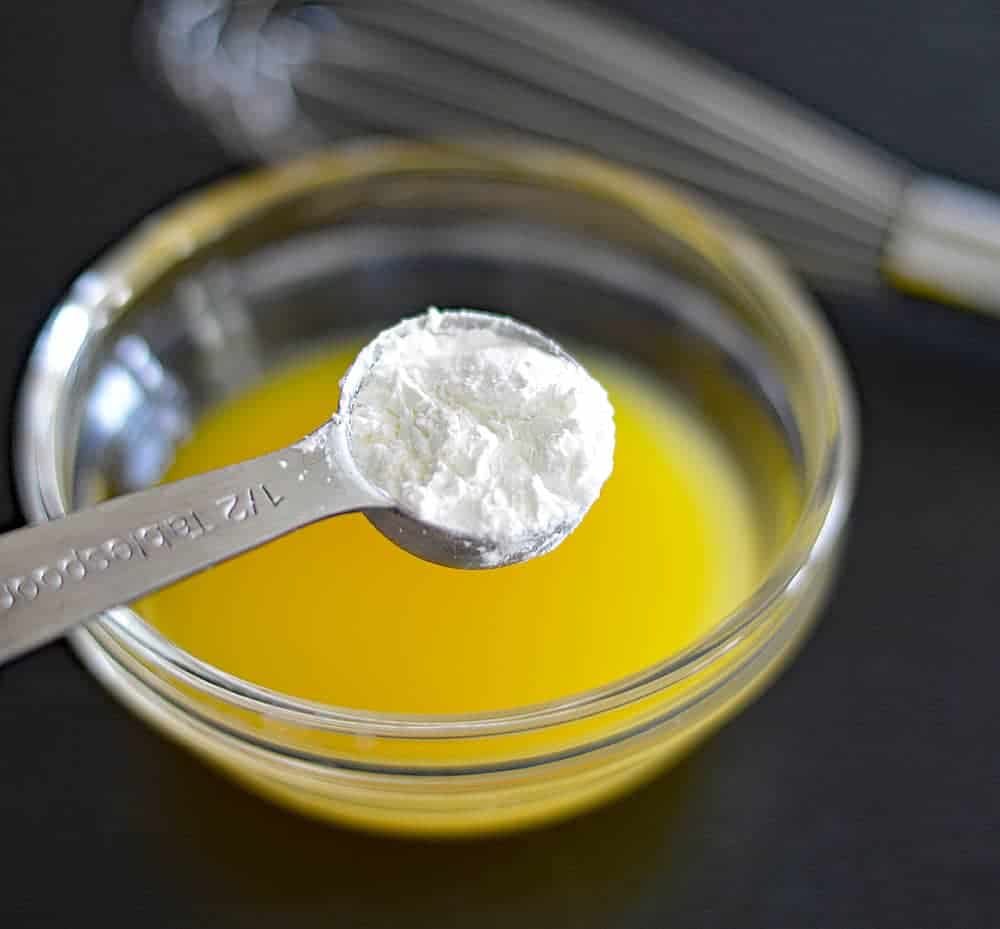 This mixture then gets added to the fruit along with a bit of sugar.

Give it all a good toss and place into an 8″ x 8″ baking dish. Set aside while we prepare the topping. 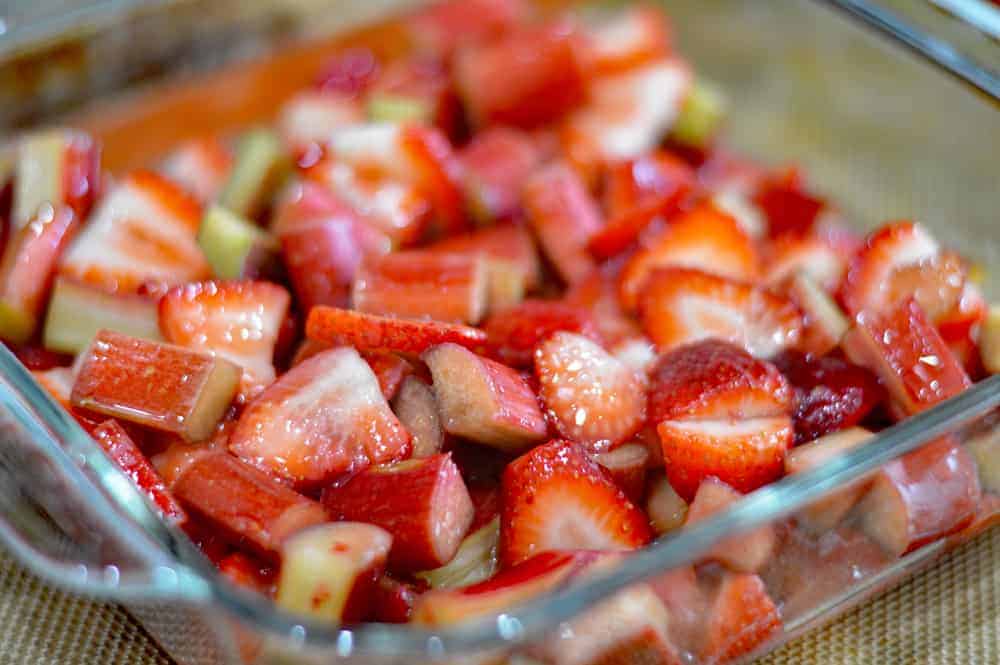 What is the difference between a crisp and a crumble?

To be honest, not much and they get confused with one another a LOT!

A crisp is generally butter, brown sugar, flour and oats. A crumble is pretty much the same thing but some articles I’ve read say that crumbles should never contain oats. We’re going to call ours a “crisp” but also added white sugar and a pinch of salt to really bring out the flavors. 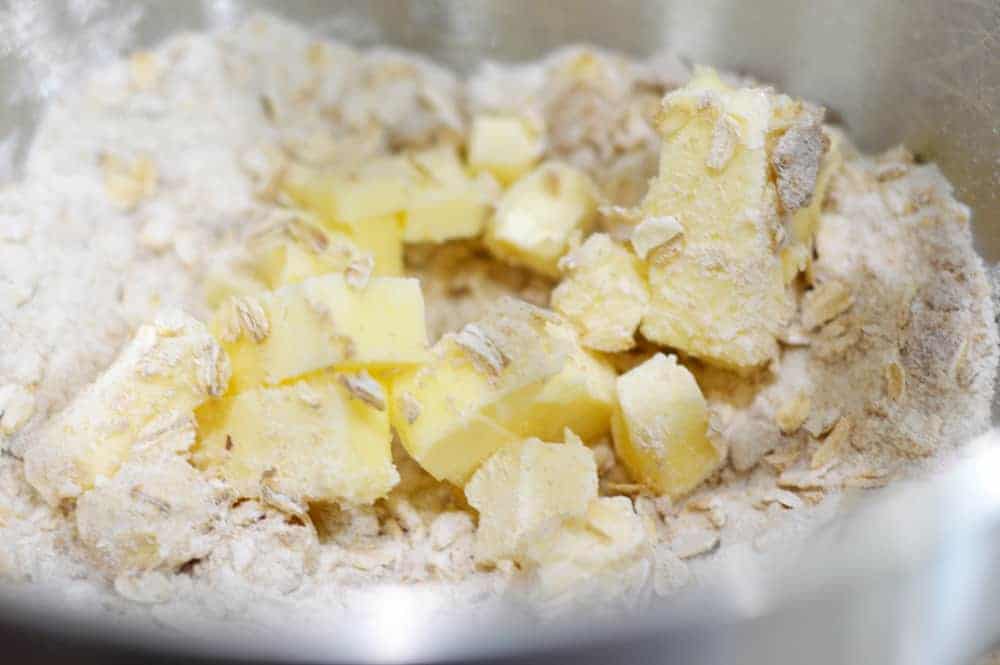 What about Cobblers, Buckles and Betty’s?

Our topping just gets sprinkled heavily over the top of the fruit. 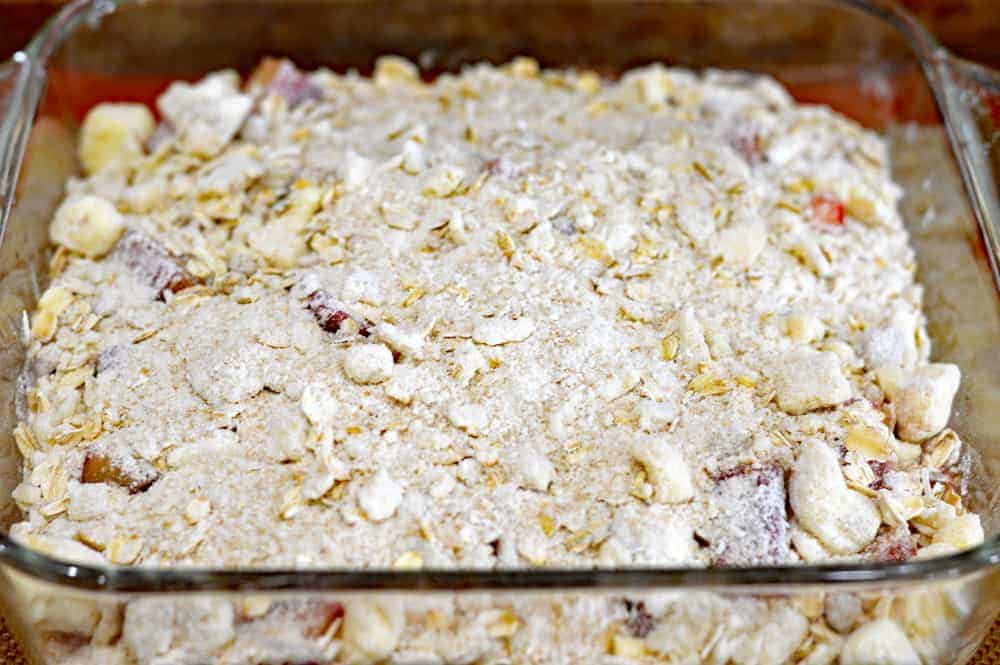 Once baked, you get the fruit bubbling up over the topping in some areas. Just look at that gorgeous red color. I love it! Serve with your favorite vegan vanilla bean ice cream. I prefer mine warm, but it will set up a bit if you have the patience and discipline to give it those few minutes before devouring 🙂 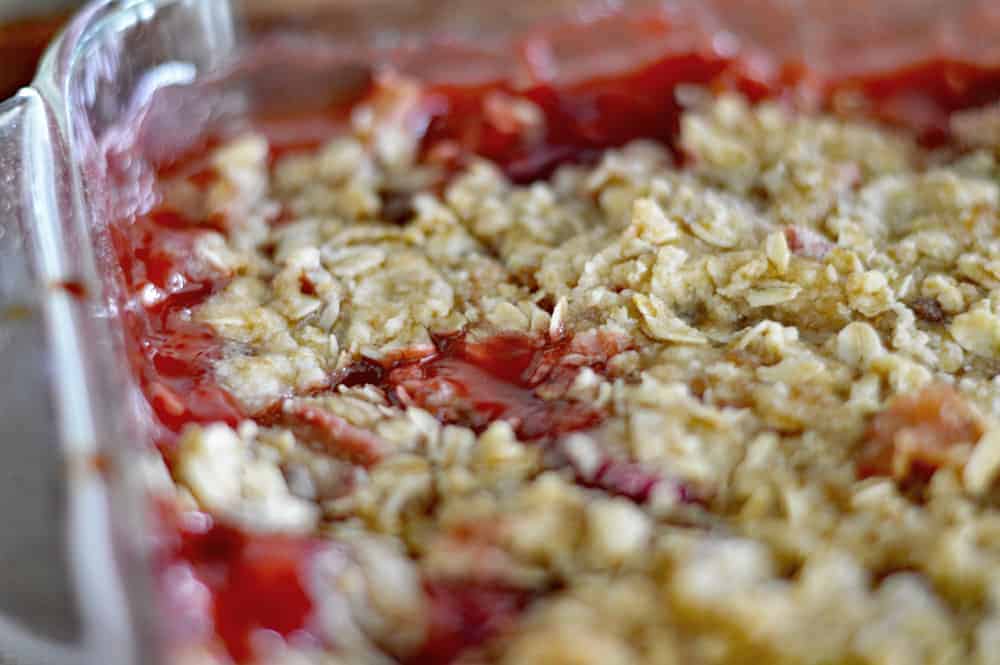 Did you make this recipe for Vegan Strawberry Rhubarb Crisp? If so, leave me a comment below and let me know what you thought. Also, if you make this recipe, tag me with a pic on Instagram @theveglife or in the Facebook Group! If you aren’t already a member, please feel free to join us. We’d love to have you.

If you enjoyed the recipe, why not PIN IT FOR LATER! 🙂 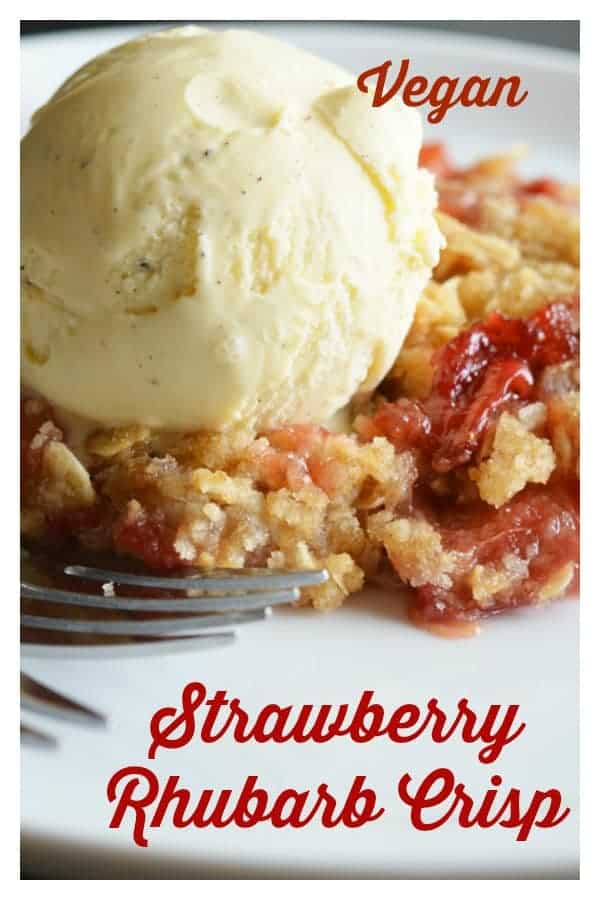 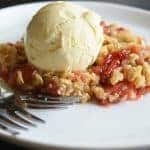 FOR THE FRUIT MIXTURE:

FOR THE CRISP TOPPING:

FOR THE FRUIT MIXTURE:

FOR THE CRISP TOPPING: 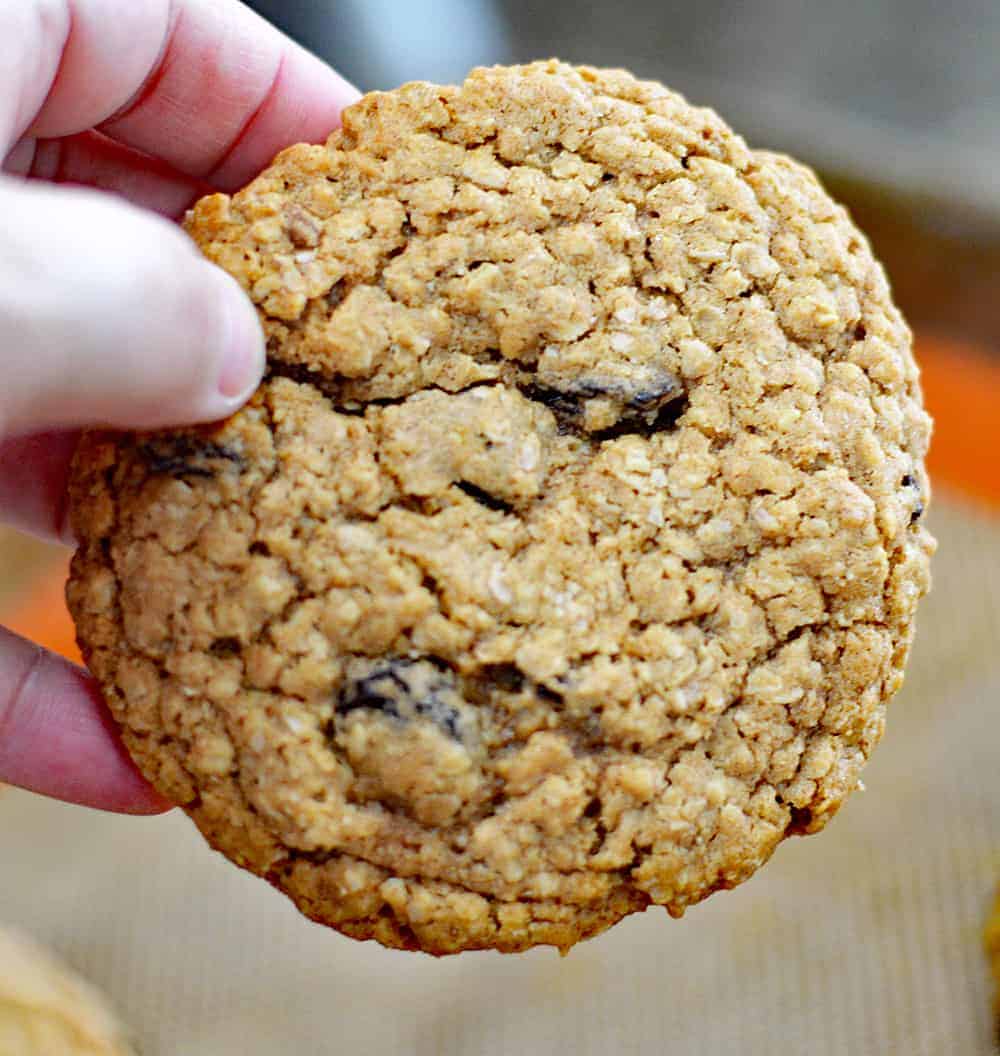 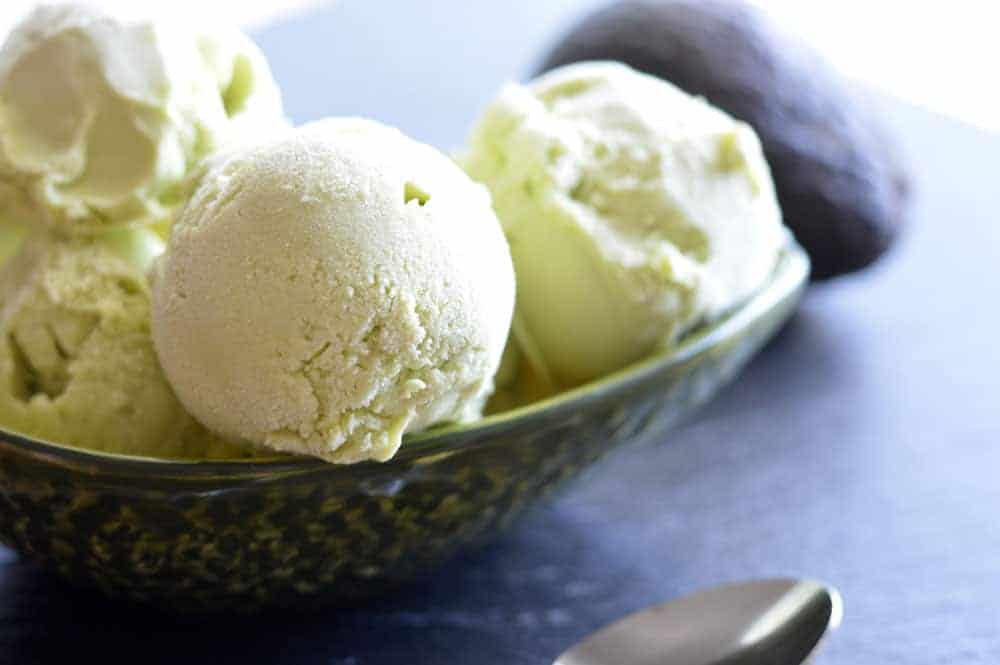