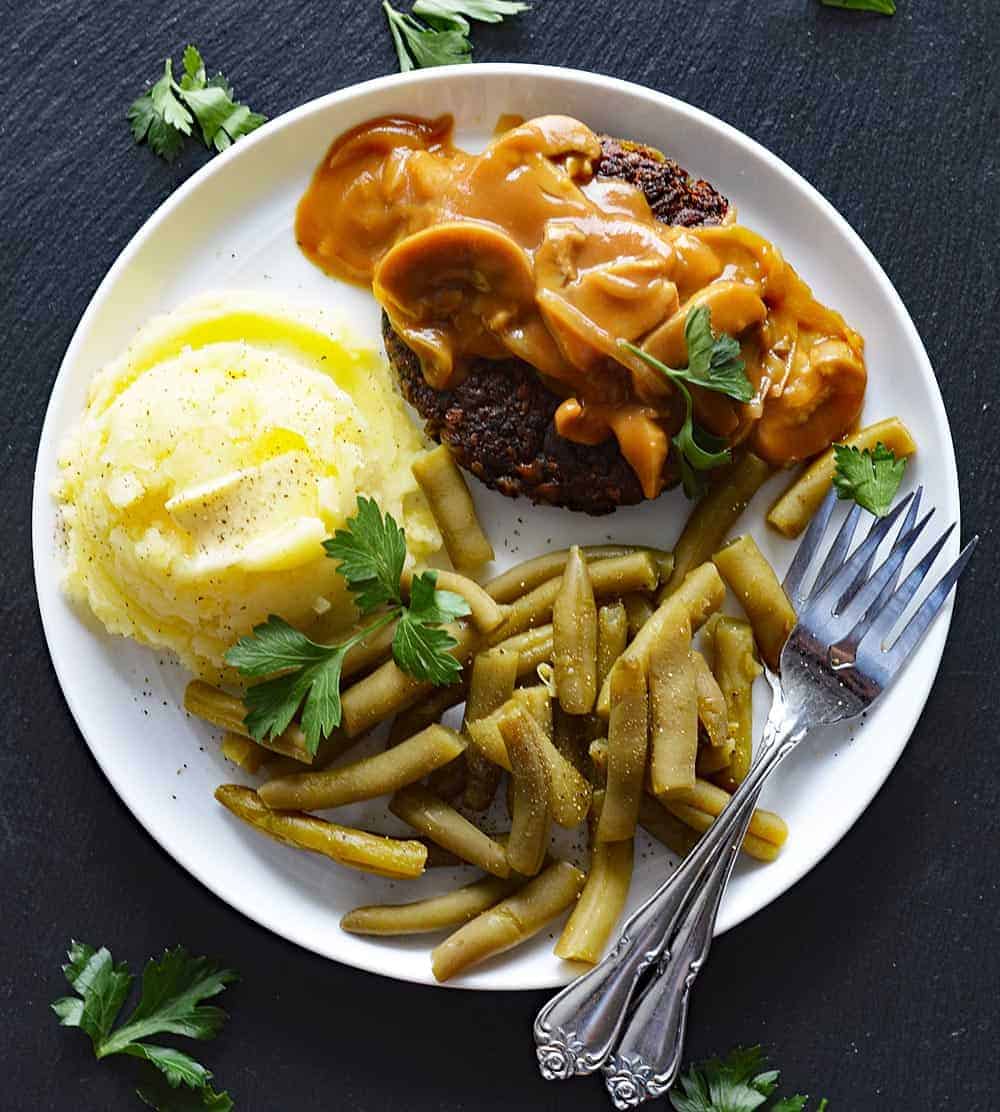 We are a participant in the Amazon Services LLC Associates Program, an affiliate advertising program designed to provide a means for us to earn fees by linking to Amazon.com and affiliated sites. For more information, click here.

This recipe for Vegan Hamburger Steaks with Onion Mushroom Gravy was kind of a spur of the moment idea based on my Vegan Salisbury Steaks with Tomato Gravy.  I was wanting to switch it up a little bit and do more of a traditional brown gravy with mushrooms and onions.  It turned out so well, I decided to photograph it and share it with you as a blog post! 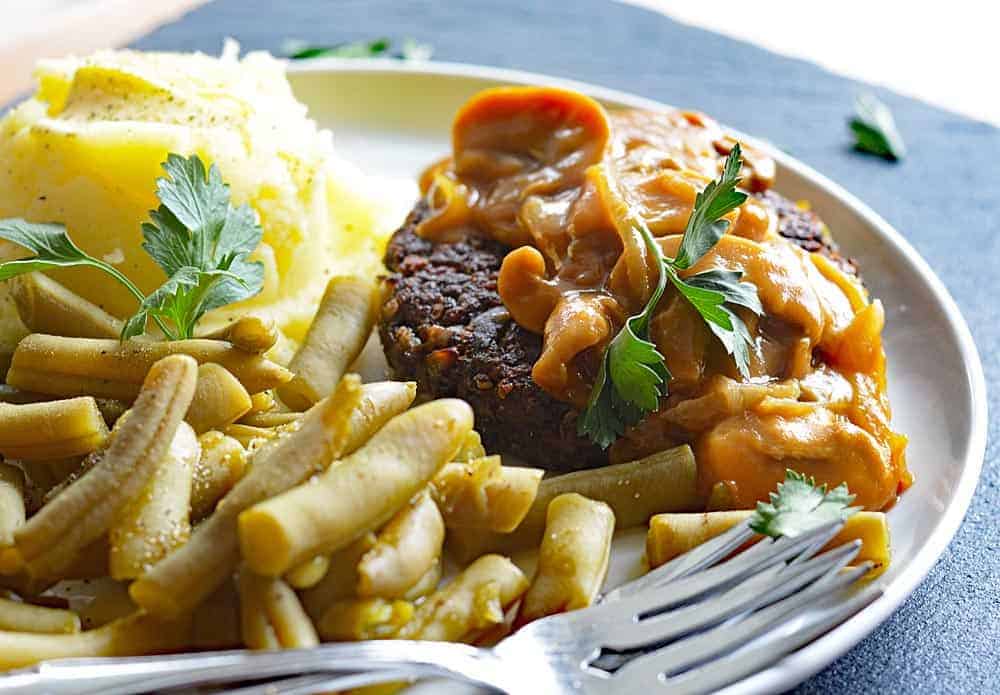 The recipe moves quickly because the processes can be done simultaneously. In one pan, you’ll saute diced onions and celery with a bit of salt and pepper.  In another, caramelize thinly sliced onions with a bit of sugar until golden brown. 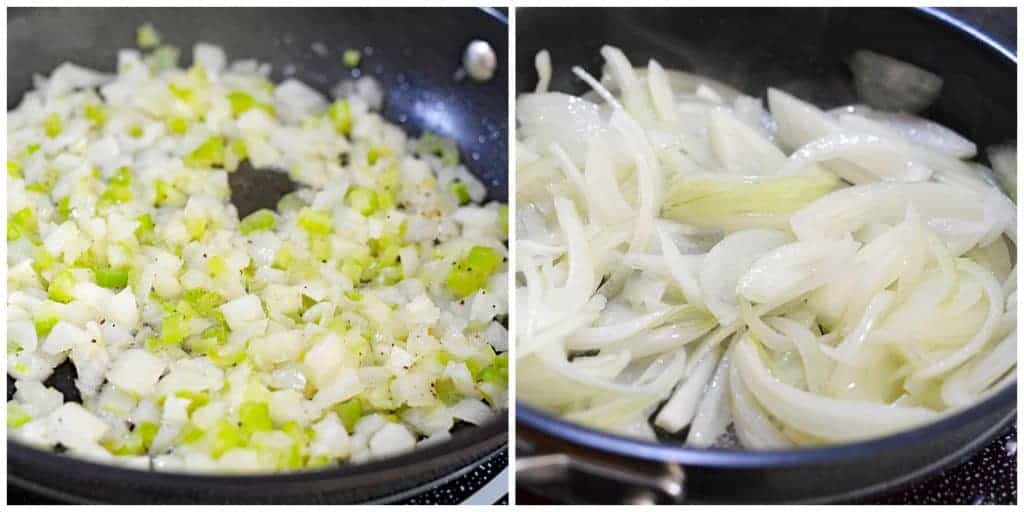 Meanwhile, in the bowl of a food processor, mince the mushrooms.  I’ve also done this by hand and almost liked it better.  It keeps things a bit chunkier. Add the mushrooms to a bowl along with the remaining “steak” ingredients.  You mixture should look like the last photo here.  If it seems too wet, add more bread crumbs.  It should be sticky though and hold together well when formed into a ball.

Form into a patty and place into a hot saute pan with oil.  Allow to cook fully on one side until brown, flipping only once.  The patties will still be soft, but firm up a bit more once you remove them to paper towels to rest.

These are also great to use as mushroom burgers on a bun with your favorite toppings! 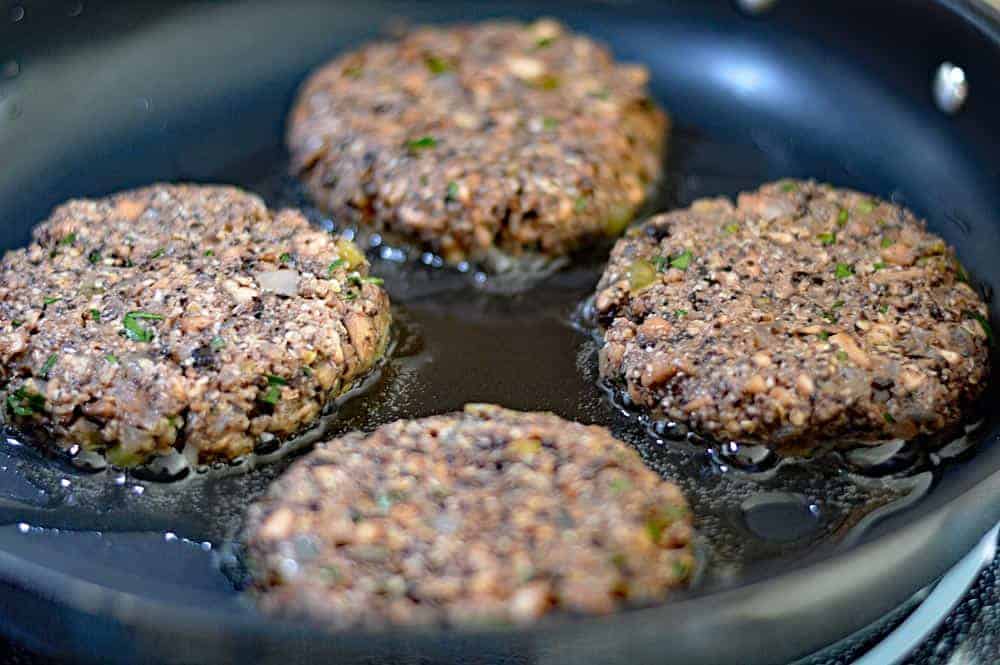 This mushroom and onion brown gravy can be used for a multitude of recipes or even just on mashed potatoes, which is how I enjoyed the leftovers! 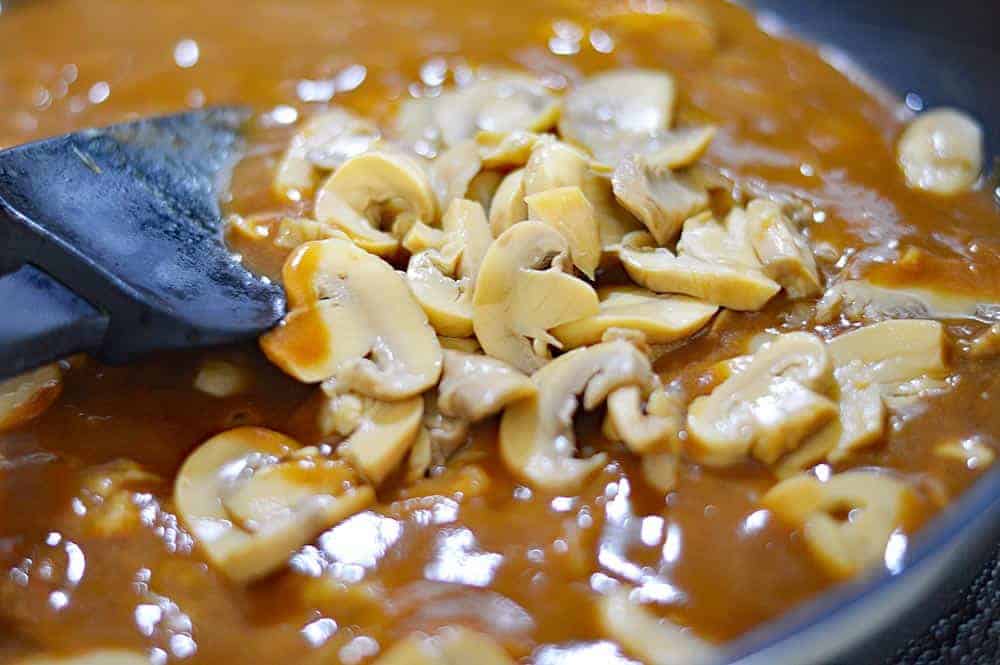 Serve with mashed potatoes and your favorite veggies. 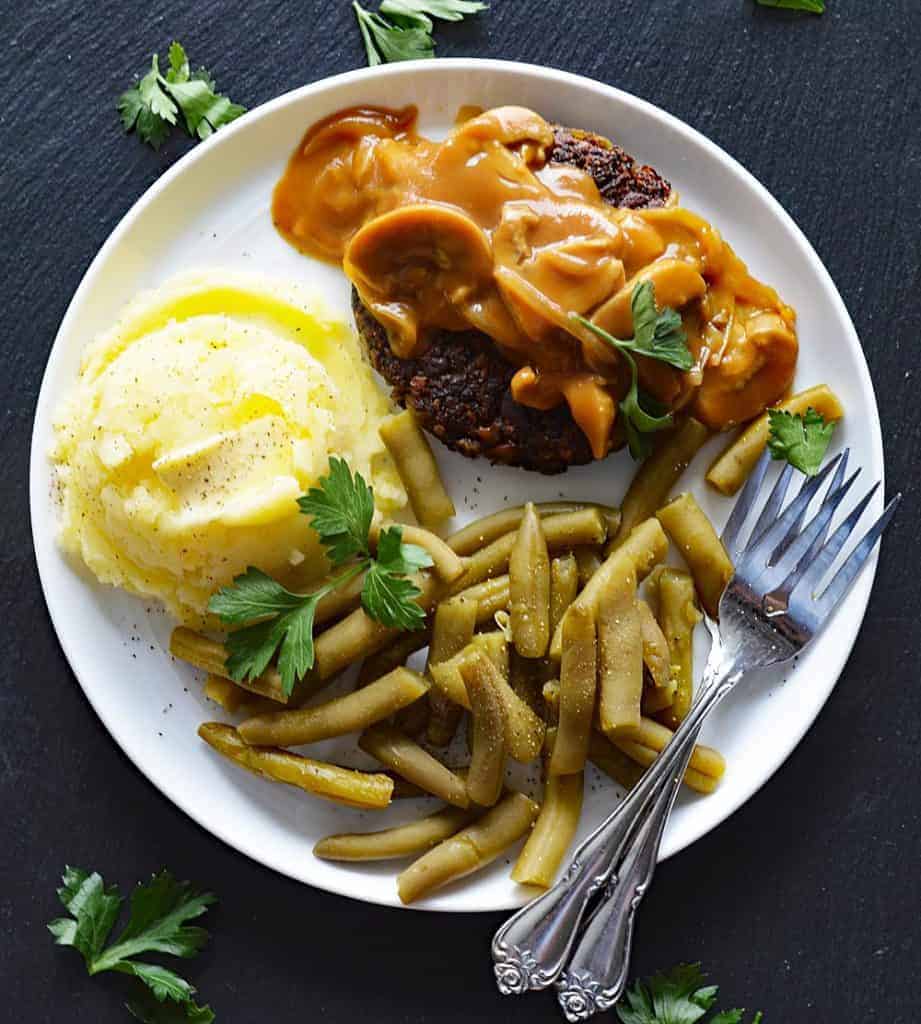 I think you’ll really enjoy this recipe and it’s super flexible. Feel free to improvise on the mushroom filling.  I don’t use a lot of salt in my recipes, so be sure to season it with plenty of salt and pepper (to taste) after cooking. 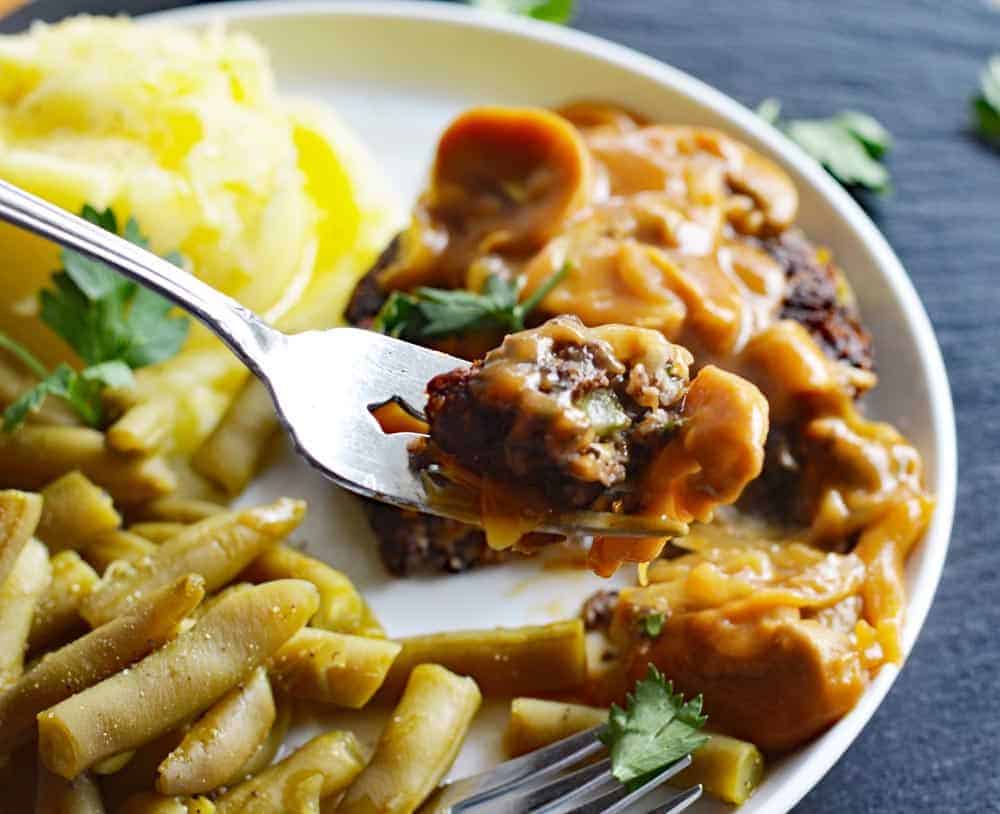 Did you make this recipe for Vegan Hamburger Steaks with Onion Mushroom Gravy?  If so, leave me a comment below and let me know what you thought! 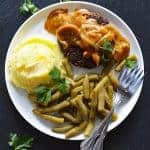 FOR THE MUSHROOM ONION GRAVY:

FOR THE MUSHROOM STEAK:

TO MAKE THE MUSHROOM ONION GRAVY:

TO MAKE THE HAMBURGER STEAKS: 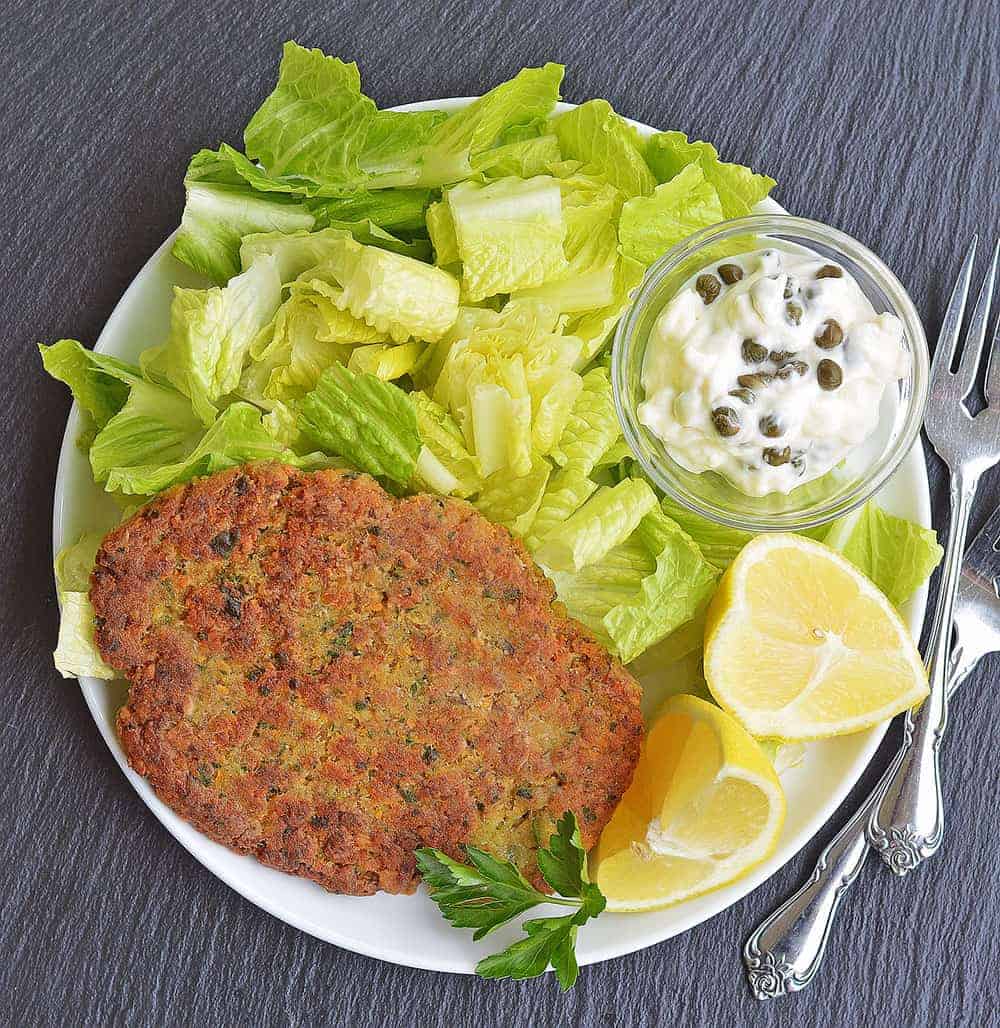 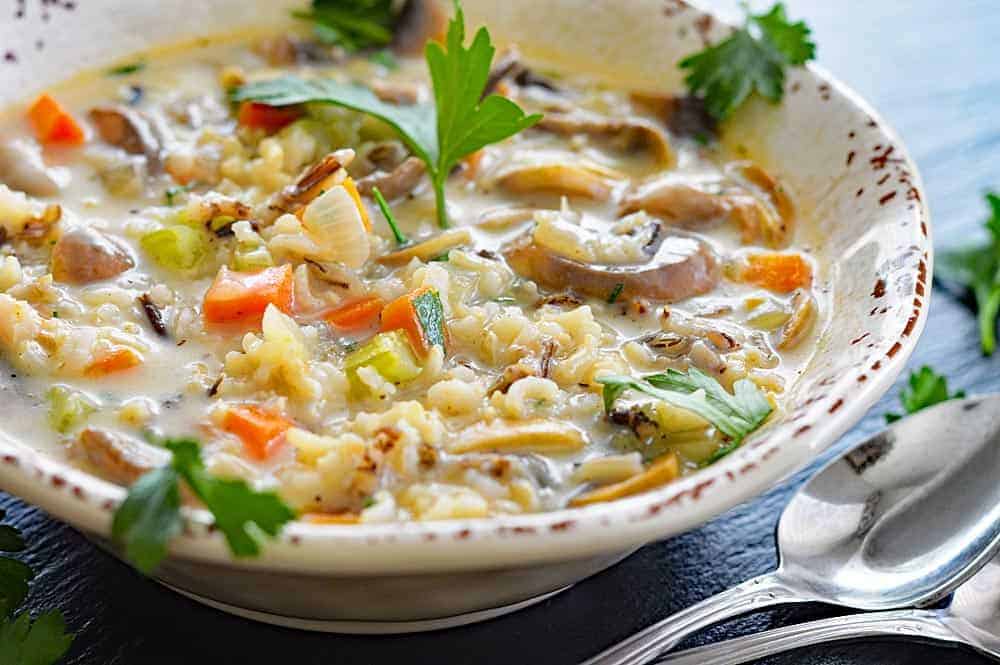